I ran across this in development new horror comic Doctor Orange and it looked so awesome I asked the man in charge Joseph Duis at @heresystudiosll   to tell us a little about it!

Doctor Orange Will See You Now

What would you do if you knew you had hallucinations but you didn’t know when they were affecting you?

That is the problem of Suhaila, the protagonist of the upcoming self-contained psychological horror comic DOCTOR ORANGE. Living in suburban Mississippi with her wife and dog, Suhaila’s life is isolated but quiet, and her schizophrenia is generally controlled when she takes her medication. But after carving a jack o’lantern for Halloween – one she names Dr. Orange – she begins having dreams that the doctor – who takes on the persona of a psychotherapist – is coming after her. When she awakens, things aren’t as she left them.

Things go downhill from there. In 22 full-color pages in which nothing is a given, she doubts her senses. Viewing events through Suhaila’s eyes, you won’t know whether she’s hallucinating everything – and is, therefore, a threat to herself and others – or whether a jack o’lantern is really out to harm her and her loved ones. And after a while, you’ll begin to doubt your own senses, as well.

There are only four days until Halloween. What will happen when it arrives?

DOCTOR ORANGE (written, created, and lettered by Joseph Duis; line art by Jose Raul Orte Crespo; colors by Maulana Faris; with a cover by Greg Woronchak and Maulana Faris; and published by Heresy Studios, LLC) is available through Kickstarter on August 14th through September 7th at drorangecomic.com. In addition to the standard PDF and print copies, there are several other rewards, such as a deluxe edition, stickers, art prints, a Dr. Orange latex Halloween mask, and even being drawn into the comic as a psychiatric patient. So check it out today!

This is their site https://www.heresystudiosllc.com/

This looks amazing so get in now! I for one can not wait to see and read it! 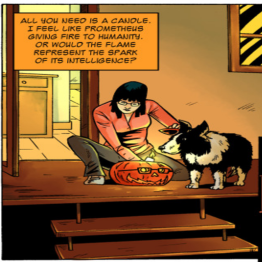