Why hello Love, Eros himself

Wont you come in and sit for awhile?

May I offer you a libation?

Some wine for seduction?

Maybe some champagne for celebration?

A tequila shot or two for regret?

Some water just to stay wet?

A little whiskey for courage?

A bit of milk to stay nourished?

An espresso to stay awake?

Or some gin to help to escape?

So Love why have you come?

Did the Lord of Chaos send you?

Or Aphrodite to attend me?

Wreaking havoc on my mind

Hoping there is enough time

But I wont miss a beat

Your sister of mischief

Trying to fool me and to lure me

Into a fate too brief

Perhaps I should send you on your way

And wait again for another day

When I have time to care

When I find your visit more sweet 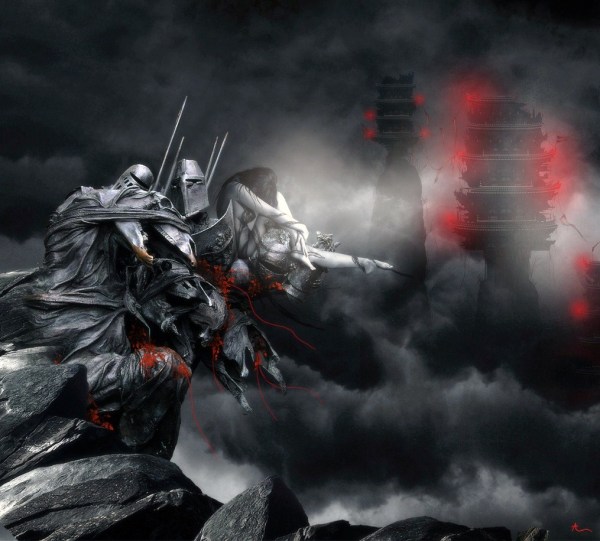 In the name of Perdition and her warrior Damnation

Cursed be thy name

Your kingdom all encompassing

Also ever lasting, your will never questioned

To avoid persecution and condemnation

Though benevolent you say you are

We are left playing in your strange bazaar

You created the mortals, and The Arcane

And put them on a chess board

For your own little game

A game where the majority loses so that

No one may reign

Soulless or hellfire is what is left to us

Damnation The Arcanes only threat

The only thing they fear, certainly not us

So as we quiver in fear in our locked rooms

Knowing your wrath and waiting our eventual doom

We pray please be kind and dont take our souls

My first interview is with someone I have wanted to chronicle for a long time, the infamous Angel Daemon or @Blutengeldaemon my good friend and part of the #horror family on Twitter.

As the Encyclopaedia Britannica states : Angel and demon, demon also spelled daemon, respectively, any benevolent or malevolent spiritual being that mediates between transcendent and temporal realms. And that is how I feel about his writing,  he is so in touch with his feelings and inner mind that they are a consummate example of what writing is supposed to be. Therapeutic, intriguing, thought provoking and yes, spiritual. Not in a religious sense but in a metaphysical one. On that note lets get to the questions:

This is a link to his WATT PAD page where you can read all of his amazing other works!

The Darkness came like black tendrils of the night

Slithering and creeping straight out of a nightmare

He came for her with his macabre smile

“Come over here my dear and sit with me awhile”

“But you scare me to death,” she said with great care

For a coldness had entered her bones

Just not from the air

It was a warm summers night

But how to stay warm when you’re filled with such fright?

“There is nothing to fear.” he said with some glee

“I can be your friend there’s no need to flee”

“What do you want she asked with trepidation?”

“Just your soul,” he said

“So that I may grow my great nation”

“My soul!” she screamed with much terror

“Yes your soul, did I speak with some error?”

“Not really he said, its easy to give”

“What nation do you speak of”

Her eyes starting to loll

“No business of yours so dont try to be bold”

She tried to run, anything to get away

But the Darkness surrounded her

And  as he took her soul from her quivering form

He laughed out loud and finished his swarm

“That I keep what I take and I reap what I sow.”

The revenge in my heart

Is crimson and black

Even though I am perturbed

By the verb that is the word

I was revitalized by the gods that had the ichor

That drained the gore

That is the lifeblood

Not in the guise of a slasher

Just deaths ever after

That changed what I do

But the apocalyptic disembowelment

That harvest the macabre creepy pasta of what others do

From the crone to the zombie, from the witch to the cannibal

Life’s own revenge is more amenable

And on Halloween Night

The Feast of Samhain

When sanguine psychos scream out in pain

Tormented they are from their torture

And the abattoir contained

Their shudders and burning scaphism

None should know of these things

But those exhumed from the crypt or the grave

But the antagonistic ghouls and their black hearts

Experience a vicissitude under the harvest moon

Though I do love the night and a fool moon

How atmospheric and spooky the tune

That comes with the gloaming

And demons, and ghosts, and clowns abound

As unnerving nightmares dancing and prowling around

As the abomination that was the sticky prowler

Was a legend amongst the paranoid collector of souls

And possession or exorcism, we all die in the end

To where we know not but it certainly impends

But the autopsy of the visceral phobias was cadaverous

In comparison to the abhorrent rot

That was a gothic romance of a homicide

The only answer to dance

Dance in the dark void

No mercy shown, no congress given

Scream into the blackness corpse

Bludgeon and poison the paranormal

Finality is our chaos

Can not avoid the approaching storm

Dark is the scream, the eek , the fear

Disturbing the putrification of the secretor

So this ode is done

But always remember that horror is nearer

“My soul soars along the ocean

My essence floats over the seas

My spirit dances in the forest

My Id plays in the trees

The animals do not fear this mortal being

Nor do the stars in the sky

Just a shame I ceded my soul away

Now all I have left is to die.”