Hey readers! Just your Horrormadam here to bring you another amazing author Jeremy C Shipp! He is a writer of weird horror, adventurous fantasy, and idiosyncratic science fiction all combined into this wildly visceral and blood-curdling works of fiction. I was so glad he introduced himself and his works to me will always be a fan. Now let’s get to the questions!

Can you please tell my readers little about yourself?

My name’s Jeremy C. Shipp, and I’m an author of weird horror tales. My short stories have appeared in various publications such as ChiZine, Cemetery Dance, and Apex Magazine. My books include the Bram Stoker-nominated novel Cursed and the Shirley Jackson Award-nominated novella The Atrocities.

When I’m not writing, I’m butlering for cats in a semi-haunted Victorian farmhouse. The ghosts took the phrase “I’ll sleep when I’m dead” to heart, so they spend much of their time napping and rarely perform.

The main question I always want to know about, why horror? What drew you to the genre?

I have always been a fiend for horror. As a kid, I would play pretend with my brothers, and we would imagine ourselves as vampires and werewolves and grim reapers. I grew up watching dark and bizarre films like The Dark Crystal, and The Adventures of Baron Munchausen, and House II. I’ve always been fascinated by monsters and magic and the darker mysteries of the universe. I can’t say why exactly. But, for me, writing horror feels right.

What are some of your favorite horror films and or books?

As far as horror and gothic books go, I love The Exorcist by William Peter Blatty, Let the Right One In by John Ajvide Lindqvist, The Haunting of Hill House by Shirley Jackson, The Woman in Black by Susan Hill, Rosemary’s Baby by Ira Levin, Hell House by Richard Matheson, Burnt Offerings by Robert Marasco, Rebecca by Daphne Du Maurier. And some of my favorite horror films are The Witch, Rosemary’s Baby, The Exorcist, A Dark Song, The Love Witch, The Shining, The House of the Devil, Evil Dead II, Dead Alive, Audition, Trick ‘r Treat, Psycho, Ringu, Ju-on, The Happiness of the Katakuris, The Funhouse, The Thing, The Descent. I could probably go on forever, but I suppose I shouldn’t. Eternity is a long time.

What actually scares you?

If you could have a dinner or poker game with your favorite authors alive or dead, who would it be and what would you like to discuss with them?

For my dinner guests, I would invite Charlotte Brontë, Kazuo Ishiguro, Kurt Vonnegut, Arundhati Roy, and Shirley Jackson. At first, we would discuss world events, and the writing process, and the human soul. But rather quickly I’d realize that we were all a bit stressed about the state of the world and our fast-approaching deadlines. And so, during dinner, we would decide to play Santa Claus Conquers the Martians on the TV, and we would make fun of the film MST3K-style while we ate. It would be a good night. 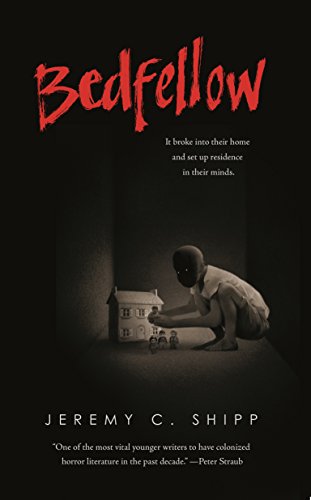 As an author, do you have a writer‘s kryptonite?

The entire writing process feels a bit like kryptonite to me. Everything is hard and frustrating, and I really wouldn’t have it any other way. I suppose my most potent kryptonite is my tendency to hyperfocus on one particular sentence or word. I can spend way too much time trying to compose the perfect sentence when I should simply move forward with the story and come back later. When will I ever learn? Probably never.

How much of yourself do you include in your writings?

I tend to only include some small bits of myself here and there. Perhaps a fingernail clipping or a pint of blood or a chunk of the spleen. In Bedfellow, for example, Tomas likes to hang out in a secret, leafy, magical space that exists between his neighbors’ fences. In reality, my brothers and I truly did play in such a gap. Vampires and werewolves and grim reapers crept among those fallen leaves.

What would you tell your younger self as a writer?

I first started writing short stories in 4th grade, so I would tell my elementary school self to invest all his birthday and yard work money in Apple stock.

When I was a teenager, I first started getting stories published, and I would tell my teenage self not to sell the Apple stocks, no matter how tempted he was to buy an electric guitar and a car with air conditioning.

I would also tell him that rejection letters are a normal part of a writer’s life and not to take them too personally. I would tell him that he shouldn’t stop himself from reaching out to other writers for advice and for help

When they make the movie of your life, would it be drama/comedy/horror and who would star as you?

I’d like a Jeremy C. Shipp character to appear in a Bill & Ted reboot in the distant future. In the movie, monsters overrun the Earth, and Bill and Ted travel back in time to get a monster expert to help them. They assume that I, as a horror writer, would somehow be able to deal with the vampires, werewolves, and other creatures. Ultimately, we end up befriending the monsters, and the world is saved. Jeremy C. Shipp would be played by a descendent of Sam Rockwell, because he’s an amazing actor, and he looks a bit like me, I think.

What do you do for fun or relaxation?

I enjoy watching great movies and excruciatingly terrible movies. I’m not much interested in mediocre films that exist somewhere in between.

I read books as if my life depended on it, and it probably does.

I like trivia games, even though I don’t have the mind for it. Ask me when the War of 1812 started, and I’d probably get it wrong.

One of my favorite things in the world to do is to watch The Bachelor or The Bachelorette or Bachelor in Paradise with my partner. Hard as I try, I still haven’t written a horror story as terrifying as those shows

What are you working on next or whatever other projects you are on that we should look out for?

I’m working on a currently untitled novel that will be published by Meerkat Press in 2021. Here are some details:

In Shipp’s newest novel, we will follow Seraphina Ramon into a once-abandoned amusement park now populated by a community of cultists. To our left, a dragon-themed roller coaster rests on the blackened earth, curled up like a dead snake. To our right, an animatronic Humpty Dumpty falls off a concrete castle and shatters on the ground, only to reform itself moments later. Up ahead, cultists giggle as they meditate in a hall of cracked mirrors. This is the last place in the world Seraphina wants to be, but at the same time, she will stop at nothing to investigate the cult that almost killed her sister. And the best way to find out the truth about this bizarre cult is to join them.

Also, I finished writing a horror screenplay a couple of weeks ago, and I’m hard at work on another.

In addition to all this, in my secret lab, I’m genetically engineering a miniature version of Cthulhu about the size of a dachshund. I’m hoping to create a couple hundred of them in my first batch. Gods, goddesses, and various other ethereal beings keep warning me not to do it, but I’m sure they’re just overreacting.

I would like to thank Jeremy very much for taking the time to answer my questions and for his amazing storytelling talent! If you want to learn more I have included some links for you to check out!