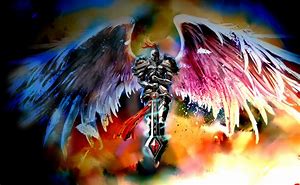 I am writing a novel right now that is nearing completion. The name of it changes daily 😉 but the characters are always the same and I thought it would be a good idea to introduce them and list them so as to make them easier to keep track of when my novel is finished. They are where our myths and legends come from, so without further adieu:

The first group is The Arcane, A race of beings created long before us by a superior being known as :

Perdition~ The High One. Controls everything in the universe and can appear as anything she wants, human, female, male, young, old, or from another planet.

Desdiderium/Damnation/Dire~ He is basically Perditions henchmen in three guises. The first is Desdideriun who appears more like a man and is the diplomat/ speaker for Perdition. Damnation is the ultimate warrior and the only thing that can kill an Arcane being. And Dire is the one who looks over all other species in the universe then mortals, mainly animals, and he comes in the shape of any animal he wishes.

Carey/ The Darkness~ He is one of the most powerful Arcane with immense powers.

Rowan~ Whose powers are generated by the stars.

Marcus~ Whose powers are stimulated by water.

Holly~ Whose powers are all fire related.

Skye ~Her powers are more seduction and sexual

Ares ~ Is all about combat and warfare

Jane ~ Collects the souls of poets, artists, and musicians. Perdition made her like a little pet but made her broken.

Marie~ Is a white witch and practices all things like Gaia the Earth mother.

Hecate~ Marie’s sister and a dark witch, her powers are that of the night and she is a Necroscope

Hunter~ Is a white warlock and resembles the fertility gods of old.

Mitch the Faceless~ More on Mitch later, but he will be the bartender without a face.

The rest of my characters are all mortals that have the distinction of falling under the radar of The Arcane who want their souls for a game to see who will reign supreme.

Gabriel~ From Scotland, owns a distillery

Hamish~ A good friend and coworker of Gabe’s, also Scottish.

Christian~ Who loves a woman named Rain. He is a bouncer and an artist.

Rain~ Christians lover and she is a shark conservationist.

Paul~ Sometimes an asshole, but ex football player and running for political office.

Samantha~ Who is looking for love and works in Publishing.

Zane~ Architect who brought Gabe into group from Scotland visit.